Jack Fulkerson was born in the small town of Rockport Kentucky in 1945. Him and his large family lived in Kentucky until Jack was fourteen when his dad got a new job and they moved to Hammond Indiana. For the first sixteen years of Jack’s career, he was a construction worker. After that, he decided to change his career path and for the next sixteen years, he became the manager of the local credit union in Indiana.

Jack got married in 1964 at the age of nineteen to a woman who was twenty-one. They were married for eight years. Throughout that time, Jack knew he was gay, but he suppressed his feelings. During the marriage, he had two children, one boy and one girl. Jack had a rough transition from being a straight man to being a gay man. In 1972, Jack got kicked out of his church because they suspected that he was gay. That same year, his wife left him. When Jack came out to his family; his brothers, sisters, and father rejected him. Jack said, “It was a struggle.” After two years of struggling to find his place, Jack met his partner for the next twelve years, in 1974. They had plans to retire when they turned fifty-five and move to California together. However, unfortunately on November 7, 1986, Jack’s partner passed away due to AIDS.

After Jack’s partner passed away, Jack lived in Indiana for fourteen more years. During that time, he got the news that he was HIV positive. He kept the news a secret for all of those years. Jack would drive back and fourth from Indiana to Chicago at five o’ clock in the morning to get his medication and treatments without anybody knowing. Eventually, Jack told his daughter that he was HIV positive. His Daughter started to reject him, and would not allow him to see her son because she believed Jack would infect him with AIDS. After a tough fourteen years, Jack took an early retirement, bought a one-way ticket, and moved to California. In California, Jack joined many support groups and started two or three of his own for HIV positive men. He was also elected on the board of the Northeast Valley Health Clinics. He served on the board for nine years. This was also where Jack got his heath care in California. Jack’s doctor told him not to let the fear of his disease take over his life. Jack said, “That was the best advice I could have gotten.” He has now been HIV positive for 26 years. 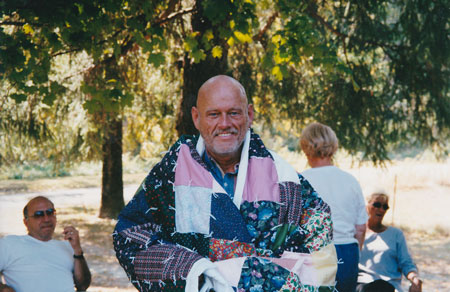 One day at church, Jack met a woman who was in the process of moving into Triangle Square. Jack helped her move into her apartment, and decided that he could see himself living there as well. He put in his application and a year later, an apartment opened up and he moved into GLEH. Jack’s experience at Triangle Square has been great. He loves the people and he likes being with other LGBT elders. Jack is one of the younger residents at GLEH and he enjoys helping others and some of the older residents in the house. Jack’s main goal that he has set for the rest of his life is to live until he is 93 years old. Jack said that he is not scared of anything. Many people fear death, but Jack said that the thought of death does not bother him. Jack has a very positive outlook on life and he intends to live a full and happy life until the day he dies.