Don Foley was born in Northwest Iowa in the year 1930. He grew up with a large family consisting of eight children, four boys and four girls.

Don was a problem child, and was sent to Father Flanagan’s Boys Town in Nebraska from 1941-1943. After Boys Town, Don graduated high school and moved from his hometown in Iowa to sunny Southern California. Don joined the navy in 1948 and was in active duty in San Diego for one year and in reserves for four years after that. 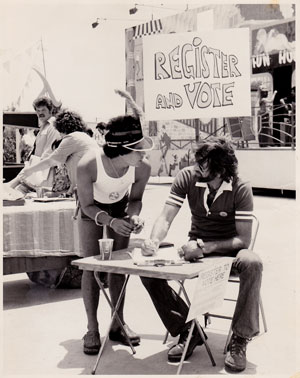 After his years in the navy, Don moved from San Diego to Los Angeles in the early 1970s. Don was a self-employed carpenter in his years in Los Angeles. In those years, he built many structures that were used by groups that fought for gay rights.

After moving to Los Angeles, Don became involved in many groups and clubs for the gay community. He was a part of the Stonewall Democratic Club starting in 1975. This is a club for gay, lesbian, bisexual, and transgender individuals who try and achieve equality for all. With this group, Don would go to local gay bars and make sure everyone was registered to vote.

Don was very passionate about equality for everyone and wanted to make sure the LGBT community had a voice in the elections.

That year, Don was named “volunteer of the year” by the Stonewall Democratic Club.

He was also very active in the Scott Briggs initiative in 1978, which is a law that would make it legal to fire teachers for being gay. 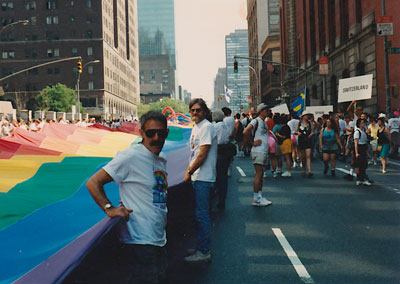 Don was in the gay rights chapter at the American Civil Liberties Union (ACLU) where him and his fellow peers raised money for the Scott Briggs initiative and marched in the streets for gay rights.

When the 1980’s came, so did the AIDS outbreak. Don had about 30 friends who passed away from AIDS. He said, “That’s just how it was in those days.” Having lost so many people close to him, he got involved with the first annual AIDS walk, and has been walking to raise money and awareness to fight AIDS for 28 years.

Don has thoroughly enjoyed his time at Triangle Square. He was paying very expensive rent with little income before the Gay and Lesbian Elder Housing. However, once he found out about GLEH, he applied and it became his home very quickly. His favorite parts about living at the Triangle Square are the residents and staff. Don is a very loving and thoughtful man. 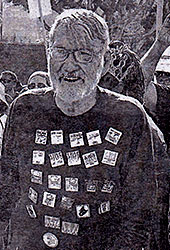 Don said that he believes in the saying, “what goes around comes around” and he lives by that.

If a fellow resident needs a ride, he gives them a ride. He tries to help people around him as much as possible, which is very evident in his accomplishments throughout his 83 years of life.